Welcome to Golden Monkey Healing, a destination for those expanding their path towards personal excellence, as well as those taking their first steps towards total wellness.

We teach. We heal. We live.

Developed by Natanaga Zhander, Shadow Yoga is a modern school of yoga that is rooted in classical hatha yoga. Emphasis is placed on four prelude forms which prepare the student for the classical asanas. Reflecting common principles found in yoga, Indian cultural dance, martial arts, and the Ayurvedic and Siddha systems on medicine, the Shadow forms combine leg work and skillful arm movements with deep breath work to strengthen and free the energy of the periphery channels. This energy can then feed into and increases the central life force.

All Shadow Yoga classes are held on workshop/immersion basis.  Please check back for updates or email with any questions. 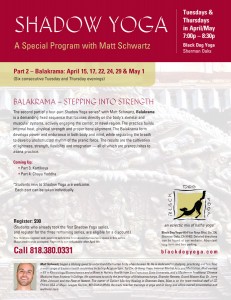 According to the hatha yoga text, the body is composed of sheaths or shadows that are usually frozen in behavioral and energetic patterns. The practice of shadow yoga has evolved in order to dissolve these blockages, bringing light to the places that were once filled with dark.

“…Yoga is designed to remove the excess of habitual living in order to free this energy so that it can be directed towards a higher order of living. Every human being is endowed with this potential; but usually its presence is masked by the fluctuations of the conditioned mind. The mind only becomes aware of this power when it stops projecting and attains a steady and concentrated state. The perfection of this state is the goal of yoga but, if there is to be a chance of success, beginners must be pointed in this direction from the beginning. The key lies in the right preparation.”

Yoga is a word from Sanskrit, the original and philosophical language of India.
The word derives from the root yuj, which has two traditional, complementary meanings.
The first is “to bring two things together, to meet, to unite, to yoke, to join, to harness.”
The second meaning: “to converge the mind” Traditionally Yoga is used as a general term for
the disciplines which join the individual soul to the universal soul or cosmic consciousness.